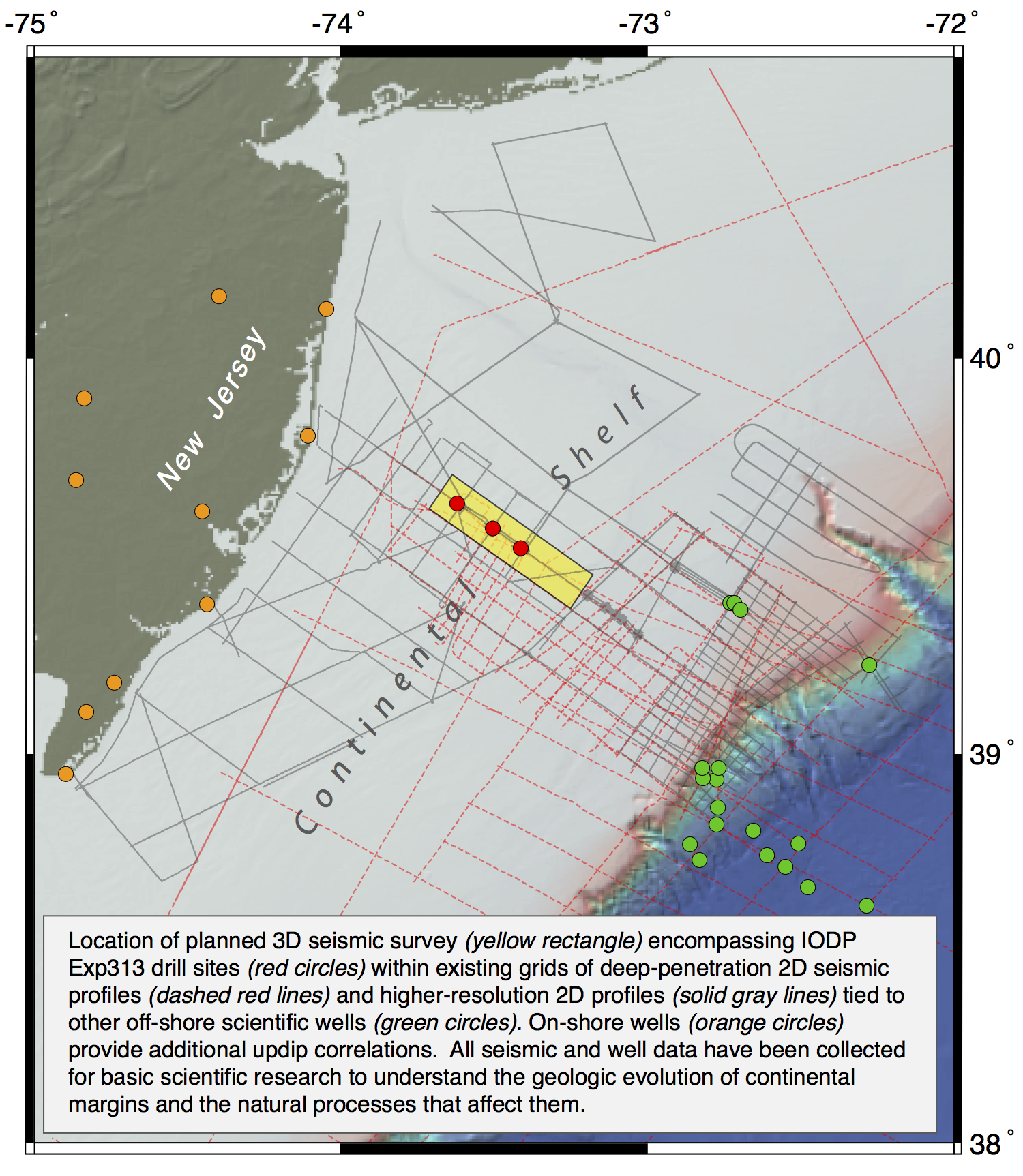 Scientists from Rutgers and the University of Texas at Austin propose to examine the geologic record of past sea-level changes 15-50 miles southeast of Barnegat Inlet.  This area was intensely studied by the Integrated Ocean Drilling Program (IODP) in May-July, 2009 when 28 scientists from the US and 10 other countries collected core samples from 0-750 m below the seafloor to determine the age of sea-level variations as much as 35 million years in the past.  Data collection for the proposed study will take place this summer with funding from the National Science Foundation (NSF), pending successful completion of the NSF environmental compliance process.

The US researchers propose to return to the IODP sample sites to collect acoustic reflection profiles using the NSF owned Research Vessel (R/V) Marcus G. Langseth.  The goal is to gather 3D acoustic images of sea-level history using technology similar to a medical sonogram that can reveal evidence of sea-level fluctuations in the layering of buried sediments.  The scientists want to learn how and why the shoreline at times advanced 50 miles landward of its present location and at other times retreated to lay bare 75 miles of today's submerged continental shelf.  At those times rivers flowed across New Jersey leaving channels, bays, beaches and other evidence of their passage.  Using images they collect, tied to the IODP's geologic samples, researchers intend to map these remains in their quest to understand the magnitude and rhythm of sea-level change and its impact on the shoreline.

Superstorm Sandy demonstrated the vulnerability of people, natural resources and infrastructure to the extremes of weather along the Jersey shore.  Matching new 3D acoustic images to existing IODP cores will provide knowledge of shoreline stability during times of sea-level change and climate variability.  No other coastline on Earth, so densely developed and vulnerable, has the opportunity to anticipate its future by looking into its past just a few 10's of miles offshore.

The R/V Langseth is operated in accordance with regulations established by the U.S. Marine Mammal Protection Act, Endangered Species Act, and National Environmental Policy Act, and receives permits reviewed and approved by fisheries biologists and endangered species experts with the U.S. Fish and Wildlife Service and the U.S. National Marine Fisheries Service (NMFS).  Ship operations follow strict protocols to minimize disruption to marine wildlife, and include such considerations as scheduling the project to avoid times of species migration and constantly monitoring for marine species during all shipboard operations.  Five protected species observers (PSOs), who have no association with the scientists or their research, will be on board for the entire cruise to listen, watch, and record animal behavior.  If PSOs observe marine mammals or turtles approaching or entering a designated radius around the ship, its sound sources will be turned off until the animals leave the area.

Notice was posted for public review on the Federal Register on March 17, 2014, detailing the steps that will be taken to limit impacts on marine species. If approved by NMFS, the data collection phase will take place this summer.  To learn more about the research goals, planned data collection and expected benefits, a copy of the NSF proposal can be viewed and downloaded from here.