Science on the Seas brings Lessons to K-12 Classrooms 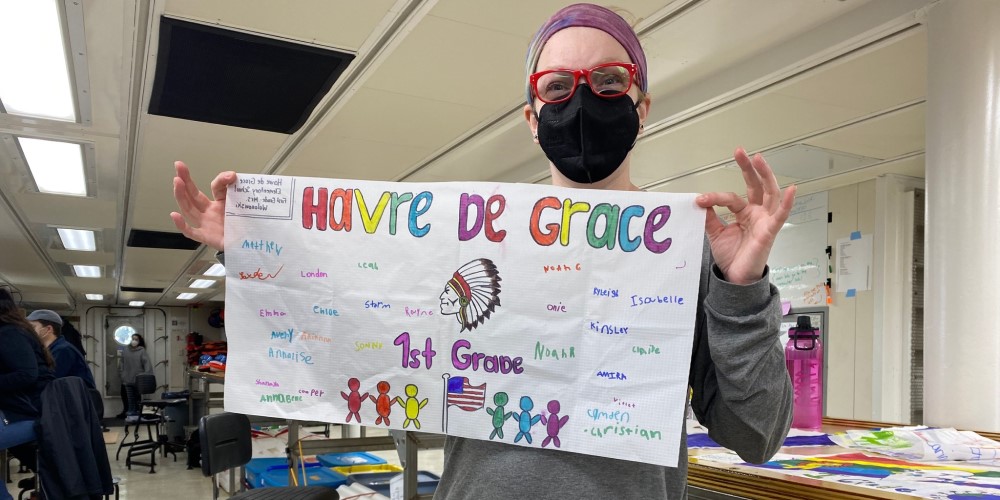 When the research vessel Atlantis steamed out of Woods Hole, Mass. on June 2, scientists from Rutgers University and the University of Washington were on board for a 14-day deep-sea coring expedition aimed at resolving key climate science questions.

Lauren Neitzke Adamo, director of the Rutgers Geology Museum, was also aboard to make the mission come alive as a real-time learning experience for K-12 schools in three states and create an enduring lesson in science for students nationwide.

Adamo, a professor of earth and planetary sciences in the School of Arts and Sciences, was joined by her own crew that included four public school teachers. They spent the voyage livestreaming and blogging to students in classrooms, public libraries, and the geology museum.

For Adamo, the voyage was a major step forward for public science education. She discusses the experience below. 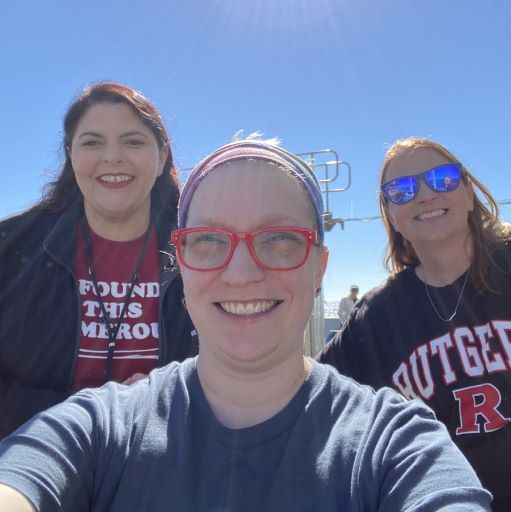 Q: This research project had a public education component built in from the start. How did that come about?

A: The principal investigators—which included Chief Scientist Liz Sykes, a professor of oceanography of the School of Environmental and Biological Sciences—had the idea of bringing classroom teachers along to connect with the public and explain the purpose of the research. So it was included as part of the grant. After the National Science Foundation approved the funding, we conducted a nationwide search for our On-board Educators, and eventually recruited four teachers from New York, New Jersey, and Texas.

Q: You are often busy with your own research, and this summer you also have a project to map volcanoes in Costa Rica by drone. What prompted you to take on the role as Chief Outreach Officer for this project?

A: One of the things I love most about being in science is communicating the exciting discoveries to the public, especially to K-12 classrooms. That has become a big part of my job as director of the Geology Museum, and I have extensive experience bringing current science to classrooms and aligning it with the national science teaching standards.

In 2018, I participated in a PolarTREC Expedition in the Swiss Alps, where I was the science communicator on the team. It was my responsibility to engage with the public through blogs, videos, and live-stream events in the field, as well assist with the field work- all of which provided 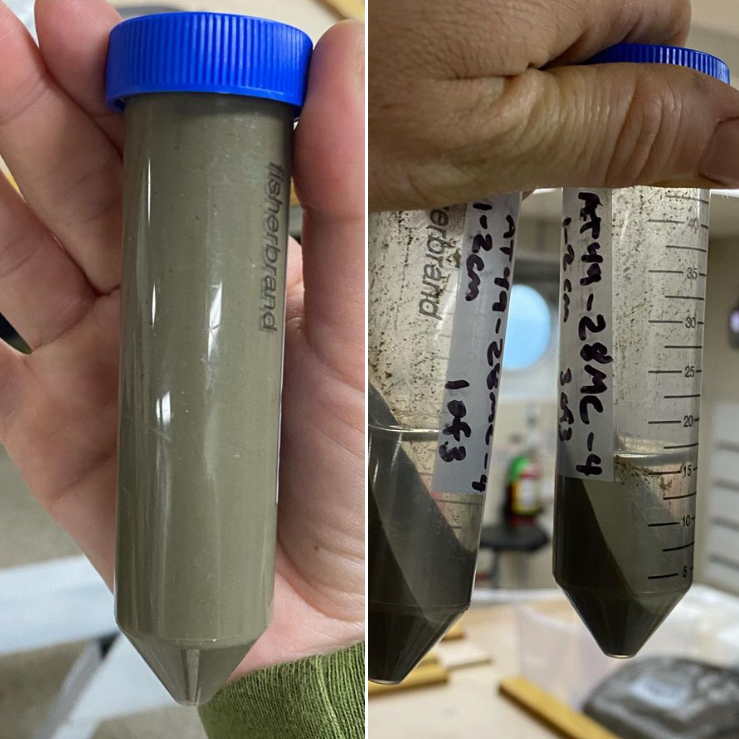 excellent preparation for this project!

Q: Getting this voyage together was really involved, with teachers having to prepare their substitutes to take over while they were away, as well as figure out how to communicate the science to the public while at sea. How did things work out aboard the ship?

A: During the week, we conducted up to four livestreams a day, engaging with classrooms in New Jersey, New York, and Texas, as well as families from all over the country. We spoke to classes and schools that had anywhere from 15 to several hundred students tuning in to hear us talk from the middle of the North Atlantic Ocean. The kids were so excited to be able to talk to scientists actively conducting research and each groups had dozens of amazing questions. We were able to engage directly with over 1,000 students during our time at sea! It was an amazing experience not only for the people watching, but also for the educators and scientists leading the sessions.

Q: How does the education work continue now that the voyage is over? 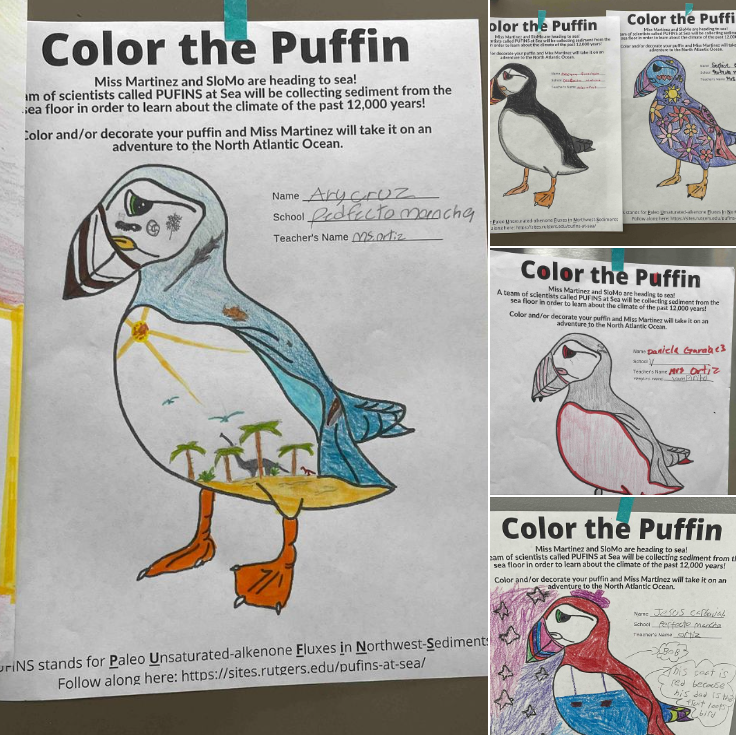 A: We are asking the teachers to create two products. Those will likely be in the form of curriculum that uses the science in their classrooms. The teachers will be working with me over the next six months to develop that content, and we will be posting it on our website so it is available for all teachers to access.

Q: What was the scientific goal of the mission?

A: There is something in climate science called the Holocene Conundrum. It refers to how there are records that show that temperatures in the North Atlantic actually cooled a bit during this time, the last 10,000 years. But that does not match the global trends. So the target of this cruise was to collect sediment off the coast of Nova Scotia and New Jersey to see whether we get the same warming trend that we see globally or the cooling trend that we see in those records.

Q: What did you feel was accomplished through the public education component?

A: I think the main reason we do this is for the students who are all excited to become scientists and then they get a little older and say, “I can’t do it,” and drop out. In our livestreams, they see their own teachers doing science, and they get to see and talk with scientists doing real research. It’s all about fixing the leaking pipeline.

In addition, when you bring climate science to the classroom, not only are you trying to address the science standards, you are also trying to teach the material in a meaningful way and show them that the science is active and alive. Not everyone is going to become a scientist. But if students are learning it in an active and engaged manner, they are going to retain it better and become informed citizens. 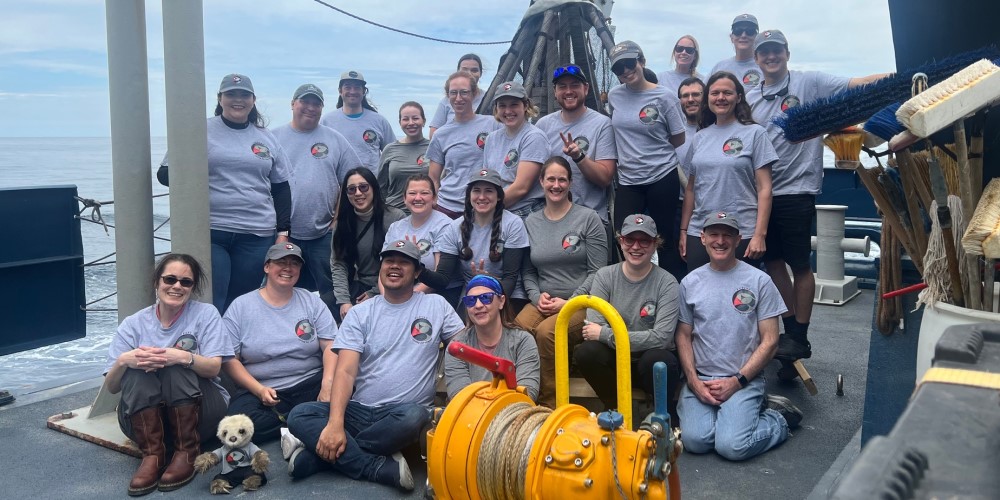