After Life on a Submarine, a Navy Veteran Takes up Earth Science - Michael Klaser moves from sonar to seismograph

"The G. K. Gilbert Award is made for outstanding contributions to the solution of a fundamental problem(s) of planetary geology in its broadest sense, including planetary geology, geochemistry, mineralogy, petrology, andtectonics, geophysics, and the field of meteoritics. Such contributions may consist either of a single outstanding publication, or a series of publications that have had great influence on the field. The award is named for G. K. Gilbert, who over one hundred years ago clearly recognized the importance of a planetary perspective in solving terrestrial geological problems.”

Link to awards description and prior recipients http://rock.geosociety.org/pgd/awards.html

Juliane is a NASA Early Career Fellow and joins us from the American Museum of Natural History in New York City after spending 3 years there as a Research Scientist and prior to that, 2 years in the Lunar and Planetary Institute in Houston

Scientists from Rutgers and the University of Texas at Austin propose to examine the geologic record of past sea-level changes and their effects on shoreline resilience 15-50 miles southeast of Barnegat Inlet.

Congratulations to the EPS Graduates of 2014 ! 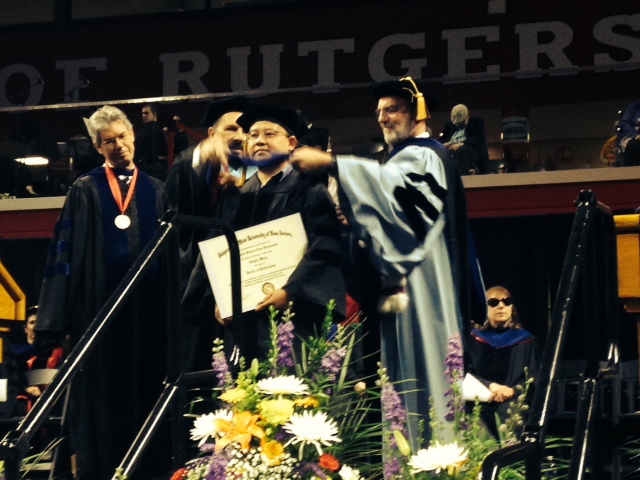 of Rutgers Department of Earth and Planetary Sciences and the Institute of Marine and Coastal Sciences, an oceanographer who dived into the depths of the world’s seas and surprised his peers by discovering vast mounds spewing hot smoke at the bottom of the icy Atlantic, exciting interests in deep-sea mining and the origins of life on earth, died on Feb. 19 in Plainsboro, N.J. He was 79. He is surivived by his daughter Jessica. Read details in NYTimes article (or download pdf copy here).


Geoscientists at Rutgers and Tufts universities estimate that the New Jersey shore will likely experience a sea-level rise of about 1.5 feet by 2050 and of about 3.5 feet by 2100 – 11 to 15 inches higher than the average for sea-level rise globally over the century.

That would mean, the scientists say, that by the middle of the century, the one-in-10 year flood level at Atlantic City would exceed any flood known there from the observational record, including Superstorm Sandy.

Ken Miller, Robert Kopp, Benjamin Horton and James Browning of Rutgers and Andrew Kemp of Tufts base their projections in part upon an analysis of historic and modern-day records of sea-level rise in the U.S. mid-Atlantic region. Their research appears in the inaugural issue of the journal Earth's Future, published this week by the American Geophysical Union. It builds upon a recent study by Kemp, Horton and others that reconstructed a 2,500-year record of sea level at the New Jersey shore. Horton is a professor of marine and coastal sciences in Rutgers' School of Environmental and Biological Sciences; Kemp, an assistant professor of earth and ocean sciences at Tufts.

"It's clear from both the tide gauge and geological records that sea level has been rising in the mid-Atlantic region at a foot per century as a result of global average sea-level rise and the solid earth's ongoing adjustment to the end of the last ice age," said Miller, a professor of earth and planetary sciences in Rutgers' School of Arts and Sciences. "In the sands of the New Jersey coastal plain, sea level is also rising by another four inches per century because of sediment compaction – due partly to natural forces and partly to groundwater withdrawal. But the rate of sea-level rise, globally and regionally, is increasing due to melting of ice sheets and the warming of the oceans."

Sea-level rise in the mid-Atlantic region also results from changes in ocean dynamics, the scientists said. "Most ocean models project that the Gulf Stream will weaken as a result of climate change – perhaps causing as much as a foot of additional regional sea-level rise over this century," said Kopp, an assistant professor of Earth and planetary sciences and associate director of the Rutgers Energy Institute.

The researchers said sea-level rise could be higher – 2.3 feet by mid-century and 5.9 feet by the end of the century – depending on how sensitive the Gulf Stream is to warming and how fast the ice sheets melt in response to that warming.

Either way, the researchers' study of past sea-level change also revealed that something remarkable started happening over the last century. It's not only temperatures that have been veering upward as a result of greenhouse gas emissions. "The geological sea-level records show that it's extremely likely that sea-level in New Jersey was rising faster in the 20th century than in any century in the last 4300 years," Kemp said.

The unprecedented 20th-century sea-level rise had a significant human impact. The study found that the eight inches of climate change-related regional sea-level rise in the 20th century exposed about 83,000 additional people in New Jersey and New York City to flooding during 2012's Superstorm Sandy.

Miller, Kopp, Horton and Browning are affiliated with the Rutgers Climate Institute, whose recent State of the Climate: New Jersey report surveyed the current and future impacts of climate change on the state.

When the Invasion of Land Failed: The Legacy of the Devonian Extinctions

A new book by George McGhee has been published by Columbia University Press.

When the Invasion of Land Failed: The Legacy of the Devonian Extinctions, New York: Columbia University Press, 317 pp.

Click here for a full description of the book.

"Rapid" and "instantaneous" are words geologists don't use very often. But Rutgers geologists use these exact terms to describe a climate shift that occurred 55 million years ago.
In a new paper in the Proceedings of the National Academy of Sciences, Morgan Schaller and James Wright contend that following a doubling in carbon dioxide levels, the surface of the ocean turned acidic over a period of weeks or months and global temperatures rose by 5 degrees centigrade – all in the space of about 13 years.

Wright, a professor of earth and planetary sciences in the School of Arts and Sciences and Schaller, a research associate, say the finding is significant in considering modern-day climate change.
"We've shown unequivocally what happens when CO2 increases dramatically – as it is now, and as it did 55 million years ago," Wright said. "The oceans become acidic and the world warms up dramatically. Our current carbon release has been going on for about 150 years, and because the rate is relatively slow, about half the CO2 has been absorbed by the oceans and forests, causing some popular confusion about the warming effects of CO2. But 55 million years ago, a much larger amount of carbon was all released nearly instantaneously, so the effects are much clearer."

The window to this important decade in the very distant past opened when Wright helped a colleague, Kenneth Miller, and his graduate students split core samples they extracted from a part of southern New Jersey once covered by the ocean.

The patterns found in the long cylinder of sediment told a story. There were distinct clay bands about 2 centimeters thick occurring rhythmically throughout the cores.

"They called me over and said, 'Look at this," said Schaller. "What jumped out at me were these rhythmic clay layers, very cyclic. I thought, 'Wow, these have got to mean something."

Wright and Schaller surmised that only climate could account for the rhythmic pattern they saw. "When we see cycles in cores, we see a process," Schaller said. "In this case, it's like a tree ring. It's giving us a yearly account through the sediments."

This discovery provided the necessary data to finally solve the huge conundrum surrounding this event – the significant error in how fast the carbon was released.

Whatever the cause of the carbon release, -- some scientists theorize that a comet struck the earth -- Wright and Schaller's contention that it happened so rapidly is radically different from conventional thinking, and bound to be a source of controversy, Schaller believes.

"Scientists have been using this event from 55 million years ago to build models about what's going on now," Schaller said. "But they've been assuming it took something like 10,000 years to release that carbon, which we've shown is not the case. We now have a very precise record through the carbon release that can be used to fix those models."