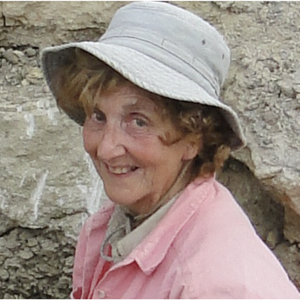 Gail Ashley announced her retirement from Rutgers University after 42 years of service to the geological sciences and our campus communities. Gail’s early career work was on the NJ coast and glacial sedimentology of Alaska and Antarctica, subsequent to completing her undergraduate degree at the University of Massachusetts and a PhD from the University of British Columbia studying sediment transport in tidal systems. However, her fascination with human origins prompted a long-term shift in research focus towards East Africa, with several notable studies from the famous fossil and archeological sites of Olduvai Gorge in Tanzania. Gail has enjoyed both research and leadership roles throughout her career, serving as the president of the Society for Economic Paleontology and Mineralogy, Geological Society of America and American Geological Institute, and supervising 39 graduate students, teaching 800 undergraduates in her signature “Sedimentology 340” class, and has overseen ~50 certificates awarded by Quaternary Studies at Rutgers since 1989. In addition, she was awarded the Antarctic Service Medal - U.S. Navy (1991), Outstanding Educator Award (2002), Cozzarelli Prize (2012), Laurence L. Sloss Award (2012), Distinguished Career Award from the Geological Society of America (2013), and the Francis J. Pettijohn Medal (2020). There was a formal luncheon on September 11th at The Rutgers Club to celebrate these many achievements and contributions. The day was highlighted by talks from former students and a slideshow with warm greetings from colleagues. It is with great respect that we honor Gail and wish her luck in future endeavors.