Professor Juliane Gross has been awarded the Antarctic Service Medal by the US Government for her COURAGE, SACRIFICE, and DEVOTION to search for meteorite fragments at the South Pole. Dr. Gross spent over a month at Antarctica searching for these extraterrestrial rocks during 2017-2018. She currently is on leave at NASA's Johnson Space Center in Houston, TX serving as assistant curator of the Apollo Moon rock collections. You can read more about the Antarctica Service Medal here.

The Antarctica Service Medal is an award of the United States Armed Forces, issued in the name of the U.S. Department of Defense. The medal can also be awarded to U.S. civilians and citizens of foreign nations who participate in a U.S. Antarctic expedition on the continent at the invitation of a participating U.S. agency, provided that they also remain south of 60 degrees latitude for a cumulative period of more than 10 days. Dr. Juliane Gross spent 2.5 months south of 60-degree latitude and of those, 7 weeks south of 85 degrees latitude, in the deep field of Antarctica near Mt Cecily to recover meteorites for NASA with the Antarctic Search for Meteorites (ANSMET) program. ANSMET is one of the most important sources of recovering extraterrestrial material and information for planetary research.

Dr. Juliane Gross was part of the ANSMET field team 2017/2018. After extensive training at the US station called McMurdo in Antarctica, she and her team were flown out into the deep field to spend the next ~7 weeks recovering meteorites from the million-year-old blue ice fields. They stayed in small 2 people Scott-tents (which are named after Robert F. Scott, who reached the South Pole shortly after Roald Amundsen but unfortunately perished on his return) during that time. These tents are pyramidal in shape, and double walled to help insulate them, with dimensions of about 8 x 8 feet squared, floor space, and are still very similar in design to the original Scott-tents. During that time, she and her team recovered 263 meteorites from the deep field of Antarctica which are a major source of the extraterrestrial material that is available for scientific investigation.

These meteorites are the world's only consistently available source of new, non-microscopic extraterrestrial material, and provide essential "ground truth" concerning the history and makeup of asteroids, planets, and other bodies of our solar system. All the material collected by ANSMET is curated for the purpose of research and public education, in contrast to meteorites collected privately, the bulk of which are frequently sold to collectors. 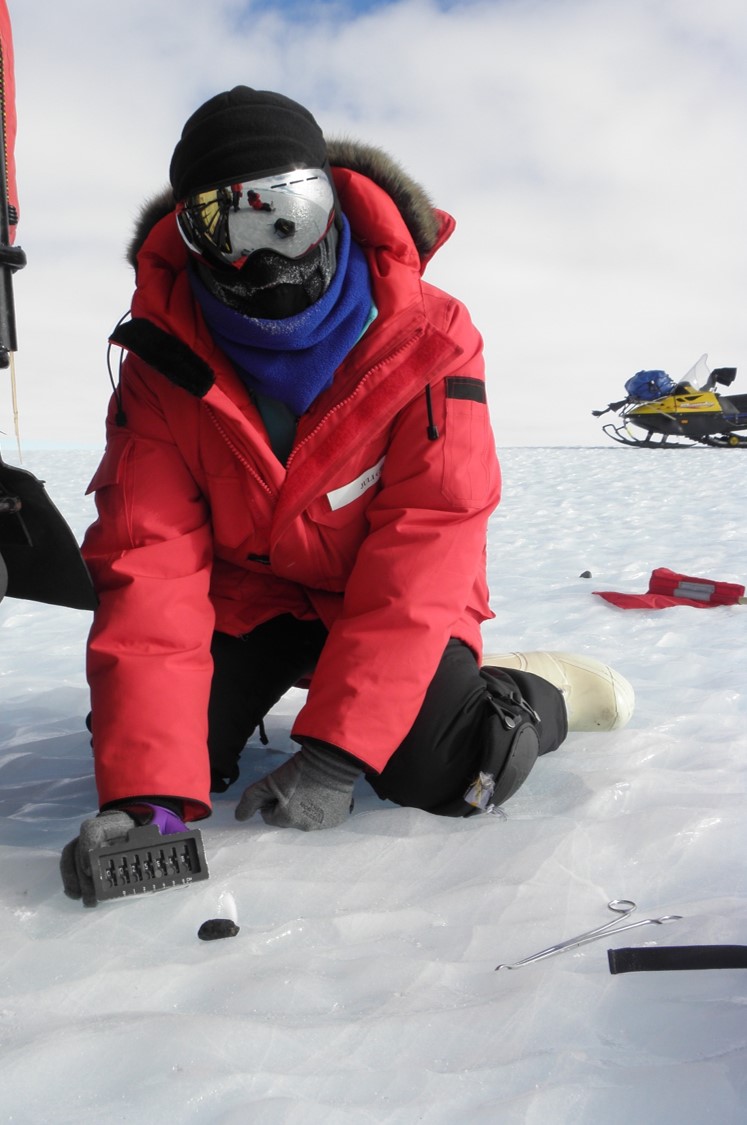 Dr. Juliane Gross’s research focuses on meteorites as well. Specifically, she focuses on the geochemistry and petrography of planetary samples, such as these meteorites, to better understand how planetary bodies like the Moon, Mars, and asteroids have formed and evolved over time. Rocks, and the minerals they are made of, record and store information about the condition from which they crystallized and, so these rocky meteorites give us a glimpse into the planet-altering processes that have shaped our corner of the universe.

The medal is bronze, 1+1⁄4 inches in diameter. It has a polar landscape view and standing figure in Antarctica clothing facing to the front between the horizontally placed words, "ANTARCTICA" and "SERVICE". On its back side is a polar projection with geodesic lines of the continent of Antarctica across with the words "COURAGE", "SACRIFICE", and "DEVOTION".